Mexican amber is a type of amber that can be found in Mexico. It was created during the Oligocene and Miocene epochs of the Cenozoic Era. Mexican amber is also known as Chiapas Amber and its sources are located in southwestern North America.

It is well known for a vast variety of inclusions such as plant fragments, fungi, as well as insects. The origins of this stone are unknown. The amber was probably produced by either two extinct trees Hymenaea Mexicana or Hymenaea Allendis, both of which were found in Mexican amber.

Mexican amber’s sources are mostly located in the Simojovel region of Chiapas. The region is known for the mineral recovery, and Chiapan amber is one of the main minerals recovered there. It can be compared with the amber found in the Dominican Republic. 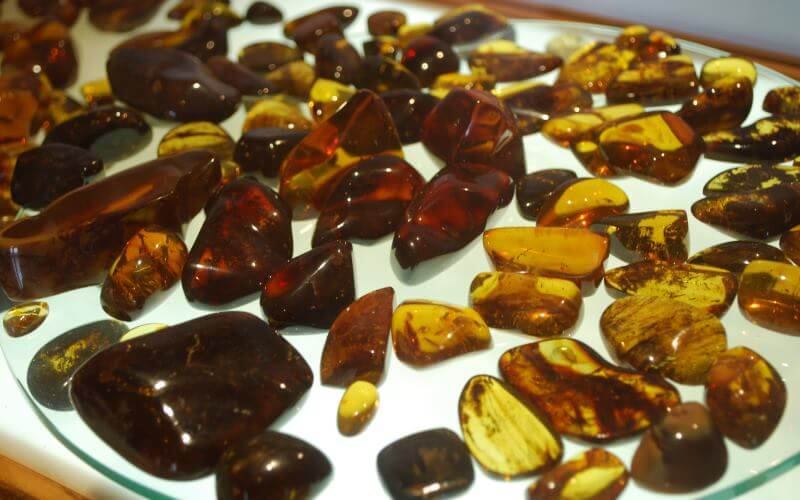 Mexican amber has many unique qualities

The oldest pieces found are 25 million years old. Mexican amber has many unique qualities, but it is well known for its inclusions, which, thanks to the amber clarity, are well preserved.

The youngest amber dates from 23 million years to 15 million years. Thanks to the natural clarity of the Mexican amber researchers were able to identify the unknown species of scorpion. It was called Tityus Apozonalli and was recovered from the Guadalupe Victoria site.

Apart from its scientific purposes, Mexican amber is used to produce jewelry. Thanks to its huge aesthetic values and a wide range of colors (from white to yellow and orange, to pink and deep red, or even green).

Mexican amber is usually worked into beautiful pendants, rings, and necklaces. The stone is believed to have healing and soothing properties by the native people.

The largest mine is located in Simojovel, which produced 95% of Mexican amber. Other mines are located in Huitiupan, El Bosque, San Adres Duraznal or Pantelho.

According to the data provided by the Museum of Amber in San Cristobal, each month almost 300 kg of amber is extracted from mines located in the state of Chiapas.