Inclusion is a term used to call pieces of extinct species of animals and plants that are dated up to 40 million years old. Resin from extinct trees, as falling down to the ground was trapped inside the drops plants and tiny animals preserving them until modern times. Nowadays amber inclusions are of special interest for researchers and scientists, as they contain mysteries of the past.

Organic inclusions are pieces of fossiled species that were preserved in fossil resin (animals, insects, arachnids). Sometimes other animals can be found as well. Spices that had been trapped in resin might have been dead or alive. To form fossiled inclusion, the piece has to be fully covered by resin and has no oxygen access.

The oldest inclusion to be found, are those found in the Triassic amber, which was formed in the Triassic epoch – the earliest period of the Mesozoic era. The earliest is dated back to the Quaternary. The higher number of organic amber inclusions is found in Baltic, Dominican, and Liban amber. They are a source of information of the highest importance, as they contain well-preserved fauna and flora that existed millions of years ago. They are especially interesting for paleontologists and in the field of reconstruction evolutionary steps of insects and arachnids. Vast collections of inclusions can be found in various scientific institutions such as museums. Sometimes amber with inclusion is also used in jewelry. 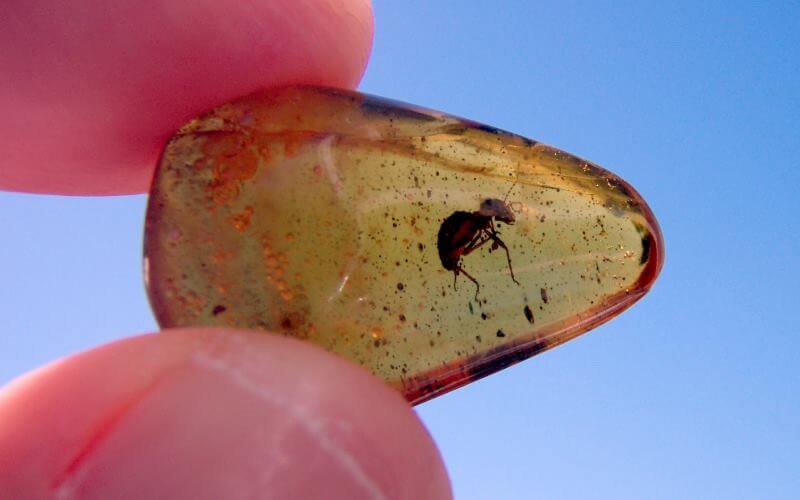 Burmese amber (dated to be about 100 million years old) is one of the best sources of the inclusions such as butterflies, spiders, lizards or scorpions. Amber is a very precious material created by nature. It is a fossil resin of ancient evergreen trees that has been transformed for millions of years into its hardened form known as amber. The fact that it contains pieces of ancient species preserved inside makes it even more special. Burmese amber is of the special interest of scientists as it contains pieces of organisms that are up to 100 million years old!

Burmese amber also, known as burmite, is a type of amber which sources can be found in the South-east Asian country – Myanmar. The amber was being recovered there for centuries but in the early XX century, due to the political changes, they all were closed. In 1999 the mines were reopened and the amber began to be exported to different countries, mostly to China, European Countries, and the United States. Amber is a very precious material because it is a natural source of the ancient species of plants and animals, that were preserved until today. How the inclusion is made? Incests are trapped in sticky resin, and then fully covered by the gold, sticky liquid. The trap reduces oxygen access and also starts the process of dehydration what results in the death of the trapped insect. This process preserves insects in their original, unchanged form.

In the amber recovered from the sources located in Maynmar animals such as insects, invertebrates, ants, butterflies, and beetles are found. Sometimes even more species are found such as spiders, scorpions, tiny snakes, or feather which are very fascinating for the scientist. 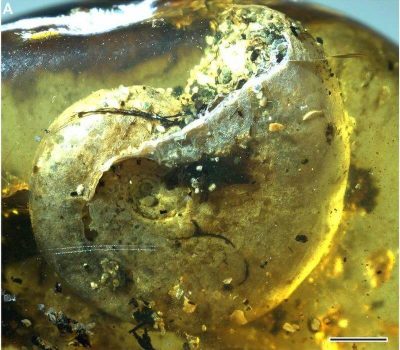 What do scientists think about the inclusions found in the Burmese amber?

According to one of them: „A large pieces with inclusions are desired by collectors and can be very expensive. It is a problem for the researchers because the stones forces are to be bought and because we cannot afford them, they are excluded from scientific research.” Organic inclusions don’t contain DNA because it is fully destroyed in the resin. Inclusions help to recreate the evolutionary path of the found species and are a great source of information about the ancient ecosystem. These researches are important because thanks to them it is possible to recreate the ecosystem of the Cretaceous. It was a very important period for the evolution of plants. In the Cretaceous, the whole ecosystem was rebuilt, what initiated the evolution of many animals. 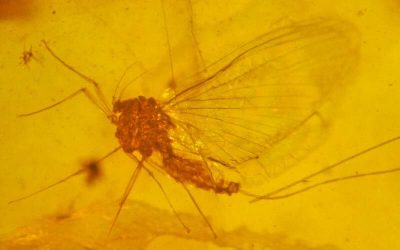 Inclusions in the Baltic amber

IInclusions in the Baltic amber are about 40 million years old when the resin from ancient trees trapped pieces of organisms such as – leaves, bark pieces, tiny animals such as insects or invertebrates. Not only organic inclusions are found in the Baltic amber but also inorganic such as air bubbles or water drops. Sometimes amber pieces containing sand or dust can be found. 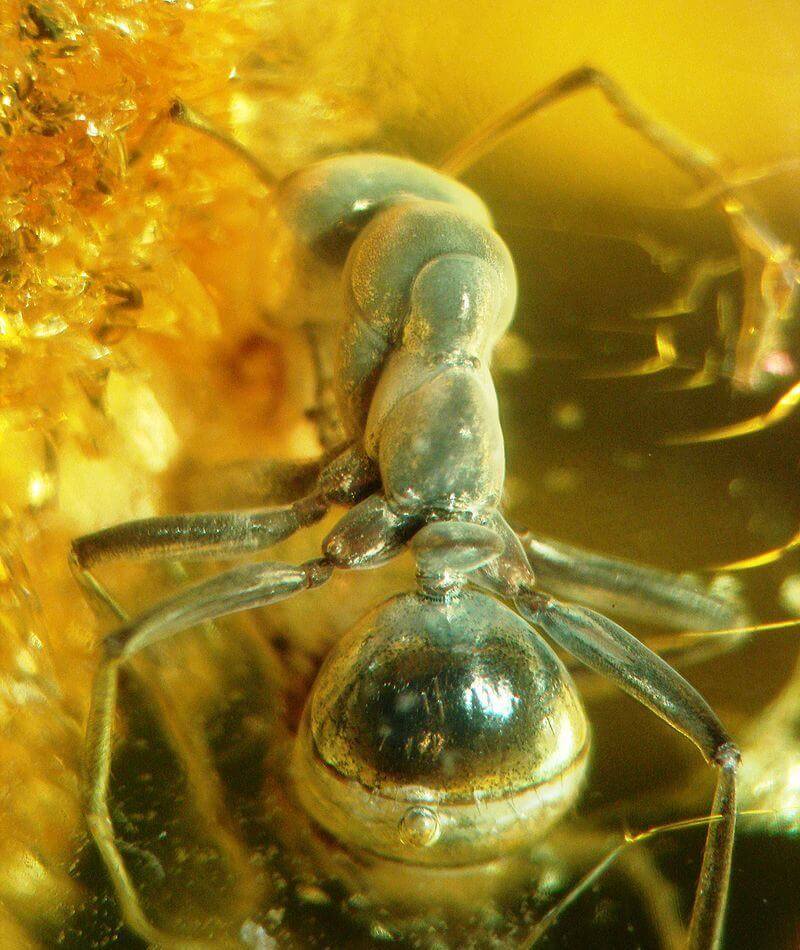 In which forms of the baltic amber inclusions occur?

The richest in inclusions are the amber pieces in the stalactite form due to the way the resin flowed. Inclusions are rarer to be found in the lump form because those are created inside the tree. There is also one more type known as the so-called „glued” form that was created from different resin layers. One amber piece may contain a large number of inclusion of one or several species.

Fauna and flora inclusions were the reason why the scientists were able to find animal and plant species that lived millions of years ago. Researchers discovered a large number of species preserved in amber and learn more about the ancient ecosystem. The most important are the inclusions containing animal pieces. In amber pieces, a huge number of animals were preserved from many different epochs. They are mostly the representatives of extinct species. Amber preserved them in unchanged form for millions of years. Thanks to that, complex experiments can be conducted. Fauna inclusions are much more common than plant inclusions. Sometimes inclusion with fragments of bodies can be found such as wings, claws or teeth. 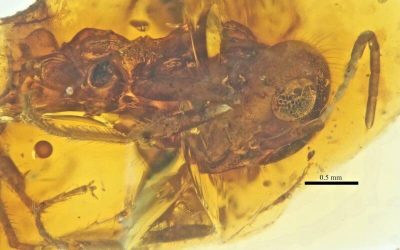 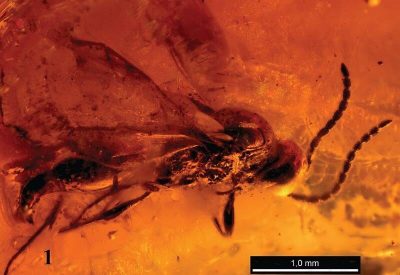 Inclusions for years are fascinating for many. It led to the development of artificial pieces made of plastic. To check its originality, a simple test with a needle is enough. Simply gently pierce the stone, if u can smell a characteristic resin aroma, the piece is real. Counterfeit amber pieces with inclusions are popular in China.

The largest group of insects preserved in amber.

The group of insects which is the most common in amber is flies of the order Diptera. Up to 70% of fauna inclusions contain a fly. Another large group is the Hymenoptera insects (up to 10%). They are mostly ants but also for example bees. Beetles of the order Coleoptra is the third the largest group of fauna inclusions. The most common are incents whose larvae lived under the tree bark. Another popular group is the animals that lived on the trees such as greenflies, butterflies or spiders which are rarest to be found in amber. The most common arachnids to be found in amber are thone of the order Acarina and Araneae. Additionally, they share the most similarities with modern arachnids. 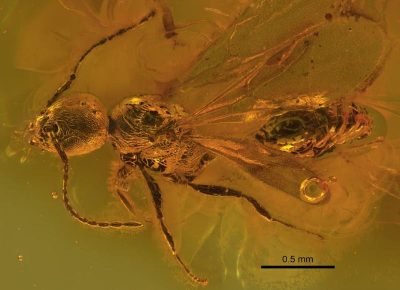 Zooinclusions are animal inclusion which can be found in amber. They can be categorized by their size. Microinclusions are smaller than 1 mm, mezoinclusions are from 1 to 5 mm big and macroinculsions are bigger than 5 mm. The first category usually is made of: eggs, protozoa, mites, and elements of larger animals that are recognized through professional and specialized optical equipment. Mezoinclusions and makroinclusions are made of flying insects or invertebrates. Sometimes macroinclusions contain Vertebrata such as snakes, lizards or little birds.

How do they look?

Zooinclusions are dry and empty inside. All tissues of animals preserved in resin, as well as DNA, were destroyed. Most of mezoinclusions and makroinclusions are covered by a milky layer made of water drops and little gas bubbles, which are the effect of the resin drying. 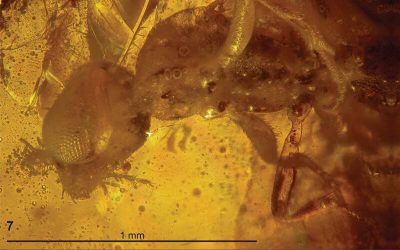 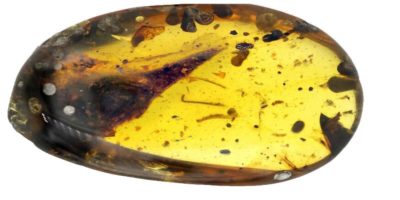