World’s capital of amber – Gdańsk and the Amber Museum

Since the middle ages, Gdańsk has been proclaimed the world’s capital of amber. Many writers and poets wrote about Gdańsk as this superior source of amber. In ancient times Baltic amber from Gdańsk was transported to the Roman Empire.

Through centuries, Gdańsk was a center of the European amber market. Unfortunately, the Teutonic Order on November 14, 1308, and slaughtered the people of Gdansk. Many of them lost their lives and their property burnt to ashes. This merciless act forced people to quit the amber industry and resulted in the collapse of the amber market in Gdańsk, as special requirements were necessary for a legal amber manufacturing. Amber was transported to Bruges and Lübeck or to Lviv because the prices of amber were extremely high there. Money was collected by specially nominated Teutonic Order officials. Illegal sales of amber were prohibited and punished.

The only exception was amber rosaries which then were sold by the monks. The rosaries were manufactured in specially designed workshops located at the Krameska street. The most precious amber creations were gifted to various different kings and queens all over Europe. This miserable period for the amber industry in Gdańsk lasted for over 100 years. Everything was changed after the Battle of Grunwald. Władysław Jagiełło, the king of Poland, was very helpful and merciful towards the amber manufactures, so they decided to work for him. To thank them for loyalty the king reduced amber market limitations and the market began to regain its popularity. Thanks to the king and the new law, amber manufacturers began to create many beautiful objects such as jewelry, decorative boxes, birdcages, lamps, cutlery and many more.

Many manufacturers also began to create more artistic creations such as sculptures, boxes or mosaics. Many of them also began to mix amber with other precious materials such as silver, gold or other precious metals. Amber was adored by those who cannot afford other precious gemstones. Amber beads and necklaces were the most popular. Ladies also adored accessories with natural amber with inclusions because it was believed that those stones attract luck. Additionally, they believed that thanks to them they can attract their future husbands. The best times for Polish amber market ended in 1793 after the second partition of Poland, when Gdańsk stopped to be a part of Poland. Under the Prussian oppression, amber lost its value. Nowadays amber manufactures from Gdańsk try to restore tradition and regain popularity all over the world. In February 2002, by the decision of the City Council, the Gdańsk Amber Museum was established as a branch of the Historical Museum of the City of Gdańsk (currently known as the Gdańsk Museum). Its role is to monitor and document amber manufacturing in Poland.

It was the beginning of collecting and catalog polish amber creations and collections. On 28th June 2006, the Amber Museum in Gdańsk was officially opened. It is located in the Prison Tower in Gdańsk and is 439 m2 big. In 2012, the museum offered 2000 pieces of natural amber, amber with inclusions, 657 artistic creation, and amber designs, and 7 antique amber objects.

The idea was to create a museum that could share general and complex knowledge about amber not only to the Polish people but also foreigners in order to regain the popularity of that gemstone. The Museum’s main goal is to share information about the origins and different methods of amber manufacturing, as wells as different natural sources, different types of amber, inclusions and its properties. The museum also tries to stop illegal amber sales and damaging natural sources in order to gain more raw material. It also teaches how to distinguish fake and real stones. Before the museum establishment about the Gdańsk amber manufacture tradition, a one could learn only in London, Berlin, Vienna and Paris museums. The key factors for that were damages done to the Polish market after the Second World War and the amber stealing from Gdańsk resources. Many precious amber objects stolen from Gdańsk can be found in various Museums in Europe. Amber Museum in Gdańsk describes in detail the origins of amber, its properties and different methods of getting the stones through years. In the museum, many precious exhibits can be found. Also, very rare pieces of amber showing various colors, plant inclusions, and animal inclusions can be found. Additionally, amber creations from different time periods are exhibited there (from ancient Rome to modern times). The most precious objects are dated to the middle ages and “the golden time” of amber manufacture in Gdańsk.

In Gdańsk amber Museum many precious exhibs can be found, among them, many beaufiful items such as decorative boxes, altars, medalions or cutlery. Also modern artistic creation and intguing jewelry of famous designers can be found there. The most important are:

Baroque Cabinet from the XVIII century – created by an amber manufacturer from Gdańsk, Johann Georg Zernebach, was the first cabinet made of amber. It consists of several drawers made of amber in many colors. 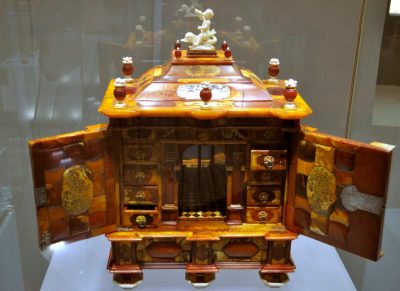 Animal inclusion – “The Gierłowska Lizard” – is the only lizard inclusion in Poland. Inside of an amber stone, a 40-million years old lizard is mumified. This is a unique piece. Its the second lizard mumified lizard to be ever found. The first inclusion like that was discovered in 1875 by Richard Klebs. The inclusion was found in 1997 on one of the Gdańsk’s beaches. Leopold Kronrnberg’s fundation donted the lizard to the museum. In the amber, next to the lizard various different plant parts can be spotted. These elements were key features to properly identify the inclusion. According to various researches, it is a young lizard. Milkywhite skin on her feet, may suggest its Baltic origins. The inclusion was exhibited for the first time at the international symposium: “Baltic amber and other fossil resin” in Gdańsk, 1997.

A decorative box with a drawer – it is a precious exhibit from the XVII century. It was bought in the New York’s antique store European Decorative Arts Company. Its measurements are 8x14x10,5 cm. It has some characteristic features. The precious object is defined by its complex composition, high precision of workmanship and special care for details.

Home altar with Madonna on the half-moon – the exhibit is dated back to 1680. It is 34 cm high, 14,5 wide and 8,5 cm deep. It weighs approximately 416,8g. It is a composition of architectural composition, with four spiral pillars on the rectangle base, it is based on four round legs with decorative elements. The altar is decorated by amber cabochons together with decorative ornamental intaglio elements and openwork bone plaques.

Home altar with a crucifix – it is dated back to 1680. It is 29.2 cm high, 8,8 cm deep and weighs 126.4g. It is a three-story exhibit based on six legs, decorated with amber cabochons and openwork plaques depicting Christ with ears of grain. It is a wooden structure, decorated with amber pieces and bone elements.

How to get to the Amber Museum in Gdansk