The Amber Coast is the name of the coastal strip of the Baltic Sea located in Kaliningrad. This area is known for amber excavation since the mid-19th century and up to date is a location of open-pit amber mines. Deposits in Palmnikenskoe and Primorskoe contain up to 80% of the world’s amber reserves, they were discovered on the Western coast of the Sambia Peninsula in 1948.

It is believed that amber found in the amber coast dates back to the Upper Eocene and Lower Oligocene. Sources of the amber are located in a delta of a prehistoric river, in a shallow part of a basin. Amber can be found elsewhere in the Baltic Sea region. The sources are usually found in a layer 1 to 17,5 m thick, located from 25 to 40 meters from the surface. Next to the Sambia region, natural amber can be found on German, Polish and Lithuanian Baltic Beaches. 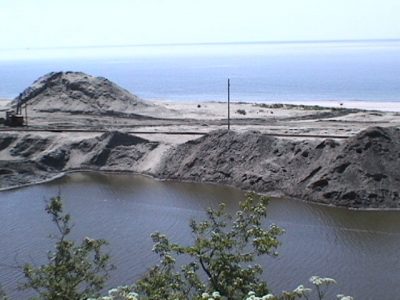 Sometimes Baltic amber can be found in areas located far from the Baltic amber, like for example the southeast coastline of England. Up to 90% or 98% of amber is produced in the Sambia region. The natural sourced there are a square of about 30-40 km, but some geologists claim that there are also deposits beyond the main excavations. Another potential larger amber source is the Courish Lagoon.

Another coast which is referred to as “amber coast” is the “Costambar” – the Costa de Ambar, located in the west of Puerto Plata in the Dominican Republic. It is the area where small shaft mines of amber are located. In those mines the Dominican amber is excavated. It is the second world’s largest amber production place, however, it is not as big as the production in the Baltic region.