A new unique coin with natural amber! Made to celebrate the symbolic marriage of Poland and the Baltic Sea.

On Thursday, 6th of February, NBP (Narodowy Bank Polski) released a special silver collectable coin of 50 PLN denomination to celebrate the 100th anniversary of the symbolic marriage of Poland and the Baltic Sea. The coin has a huge value! One coin costs 830 PLN. It is available on the Kolekcjoner portal and in NBP stationary branches. The coin has been released in 5000 copies.

About the amber coin. 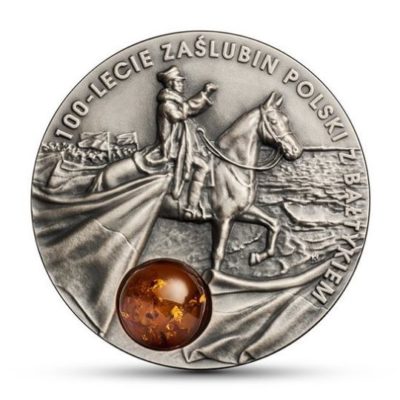 This special coin has a mass of two ounces of Ag 999 silver. This is an oxidized coin with a decorative amber application. On the obverse, there is a recovered part of Pomerania (which was oppressed by Nazi Germany) along with a Kashubian fisherman holding a long oar and coiled nets. General Józef Haller is shown on the reverse, riding a horse into the water of the Bay of Puck (the scene shows a symbolic act of marriage with the sea). A patriotic manifestation (February 10th, 1920) holding national flags is depicted in the background. There is an inscription: „100-LECIE ZAŚLUBIN POLSKI Z BAŁTYKIEM” in the top part. The decorative amber application symbolizes and underlines the marine character of the coin.